skip to main | skip to sidebar

An unpredictable spring, Truth and lies. 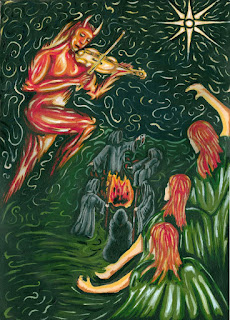 It has been a strange time of late, seeds planted at the warm turn of spring timidly peek from the dark soil to find bitter frost and chill wind awaits, unpredictable British weather at its best and as such brings no surprise.
The land is still radiant down here in the wilds of Cornwall, Mr Frost has had cause to nip at the greening flora but here at least to little effect, astounding when we consider how the equinox moon had bought with it such warmth and joy, relevant and welcome yet veiled behind lie the teeth of winter still.
The changing temperatures bring changing fortunes as the blessings and curses of life form those who would be within the arms of fate, stress and misfortune comes and fades from which we take what lessons are offered and continue to grow with hope and the love of all who surround us, blessings that come are to be treasured indeed as the year has yet to be shaped.
As a time of great change is descending upon us we journey forth, blind into the mist, not volcanic eruptions and tsunami floods but an end of a different kind, the values and dreams of the west are crumbling as I speak, propped up with false hope and paper gold, delusion and false prophets are the true kings of this "civilised" age, man has failed to see the divine so therefor it cannot be seen.
So it would seem that what we consider to be the advanced culture of western civilisation shall be the first to crumble, all beneath the light of secularism and greed, where evolution is measured in terms of technology, when in fact the very opposite is occurring, a race of beings who when faced with adversity would be unable to perform the simple tasks of feeding themselves or to create fire for warmth, a roof over the head and be capable of judgement, moral or otherwise, an idiocracy where no one is ever asked to think for themselves, nanny states and religion that is bought and sold, the second fall of mankind as it descends further away from the source.

I guess that in the light of this truth it might be pertinent to speak of the secret world of the craft, one might even ask why such secrets should be kept from the bulk of mankind upon the eve of its fall.
The truth is that there are no secrets, a wise man once said that" all knowledge is there upon the wind for one who would listen".
There are in this land secret societies and groups of occultists who would keep secrets for secrets sake and little else, to many it seems that is the case of most who practice genuine traditional craft, although it is not.
That which one would have to search for is part of an individuals argosy, to be told what the journeyman will encounter does not serve the journeyman, quite the reverse as it creates delusion, clouds judgement and becomes part of the lie. To tell someone what they will encounter within the void is to deceive, all that is gained is an insight into what the mentor has seen and if he or she is from a longer line of mentors the lie itself is spread and shaped far beyond any hope of truth. Sadly there is so much of this deception prevalent within the occult world "you shall journey to a dark cave where upon the horned one shall greet you and......." sigils and visions that might belong to the writer or even his teacher are of little use to the seeker of truth.
The hidden truth is thereby a blessing in itself, it protects the seeker from the lie and allows the seeker to glimpse something that is a reality and not a falsehood, this will later be concurred by others who have walked the path and will have experienced this divine essence in whatever shape it took, yet after the effect and not before, it is by this essence that we shall no one another and all shall be revealed in time.

And so to reveal a secret of the crooked path to all my fellow voyagers.
The crooked path is no such thing, when the foot falls with truth and devotion all can see that it is in fact the straightest path possible, the way is clear and the view is splendid, illumination and not darkness are the true ways of Fate, deception is that which lurks in the shadows among those unscrupulous individuals who would sell you your fortune, the only crooked thing about the crooked path is those rotten souls to be found along it and who actually have nothing to sell in any case, in fact it can often be said they have nothing of value at all.
The moment that we begin to think that the truth can be bought and sold as a commodity we fall further from that which we seek, beware false prophets and occult salesman as though they were thieves within the shadows of a dark alley, be patient and all will be revealed in time.

the cunning man
Eternal Student of the mysteries, Craft practitioner and family man, not enough time within any one life to consume the knowledge that is out there.